Nanni Angeli was born in Sassari in 1969. He started photography in 1989 focusing his research on landscapes. In this period he started the project “Objects…Life”, a photographic survey of the ‘stazzi’, and their historical change of use, and of the objects that have characterised the socio-economic activities of these habitations units.

In 1990 he moved to Trieste, where in 1919 he started researching on black and white photography.

From 1992 to 2911 he lived in Bologna, where he worked as stage photographer in theatre and music performances, especially in the experimentation sector, consistently documenting the Bologna ‘alternative’ scene.

In 1993 he was among the founders of the Associazione Culturale Sarditudine.

From 1993 to 1998 he documented the activities of Scuola Popolare di Musica Ivan Illich. From 1994 to 2001 he worked at LINK Project – centre of independent cultural production – as documentary photographer for the press agencies Music and Theatre, equally working on his personal archive and on a research on the photographic representation of performative events.

From 1993 to 2000 he photographed more that seventy hundred theatre events, a work though which it is possible to trace the history of what the town of Bologna has produced, especially in non-institutional venues (LINK Project, L57, Cantine del Pratello Occupato, Angelica Festival, TPO, etc.).

In 1993 he started a personal research on popular festive gatherings in Sardinia, concentrating on the functions of the Holy Week in Cuglieri and Calstelsardo, a work which is still in progress.

In 1994 he met the photographer Massimo Golfieri, with whom, beyond specialising on the study of press “fine art”, in black and white, he learnt ‘new possibilities’ of the gaze.

Since 1996 he has been working as artistic director of Isole che Parlano, (www.isolecheparlano.it), the international Festival of Music, Theatre and Visual Arts, held every year in Palau.

Since 2001 he has been collaborating with the video maker Simone Ciani with whom he realises videos and didactic laboratories (video/photography) with adolescents, which up to now have produced two cortos: “Si…dimmi” 2004 and “Divieto dʼaccesso” 2005.

In 2002 he documented the construction of two new models of the guitar “Paolo Angeli”, one for the Sardinian guitarist, and the second one for Pat Metheny.

From 2004 to 2011 he was a member of the photographers’ Association “Piccolo Formato” in Bologna (www.piccoloformato.it), with which he practiced photographic didactics and organised and documented events.

In 2004 he created, with Tatiano Maiore, “Palau e la sua memoria …e andagghjami a pédi” a reportage/interview run in Palau with 53 old people, aged between 80 and 103 years old.

Since 2005 he has been member of the association “Ogros-fotografi Associati”.

From 2006 to 2008, with the photographers of “Piccolo Formato”, he has been collaborating on the realization of the project “infrazioni, stratificazioni e confini, a visual analysis of the town of Bologna” (www.spaziurbani.it), leading some photographic surveys and various workshops on the subject.

In 2007 in collaboration with the musician Paolo Angeli, he realised the multimedia show “Linee di Fuga”.

In 2009 he started a thematic research on his personal archive, presently in progress, entitled “Tutti i Giorni” (its first publication illustrates the n.°8 year 33 of “I Martedì”).

In 2009 he started the activity as stage photographer on cinema sets. In 2010 with Paolo Angeli, he realised and published “TIBI” Dual Disk (DVD/CD), the soundtrack, and montage of black and white images, documenting 10 years of history of the Prepared Sardinian Guitar.

In 2011, with Paolo Angeli, he realised “Il Passo dei Misteri”, a montage of black and white images which document 20 years of images related to the Holy Week in Cuglieri (OR), live sonorised.

Il Passo dei Misteri, (2012 / Italy / 30min) by Nanni Angeli and Paolo Angeli, Sieff 2012  For the most innovative film: “a photographic and ethnomusicology work of vast breath is translated into a film. Through an innovative approach, the narration of the Holy Week rituals in Cuglieri is here narrated by creating a ‘new’ language, which includes aesthetic and emotional components of great suggestion”.

SPECIALISED JOURNALS AND CATALOGUES OF MSIC AND THEATRE

A lot of  WEB SITES 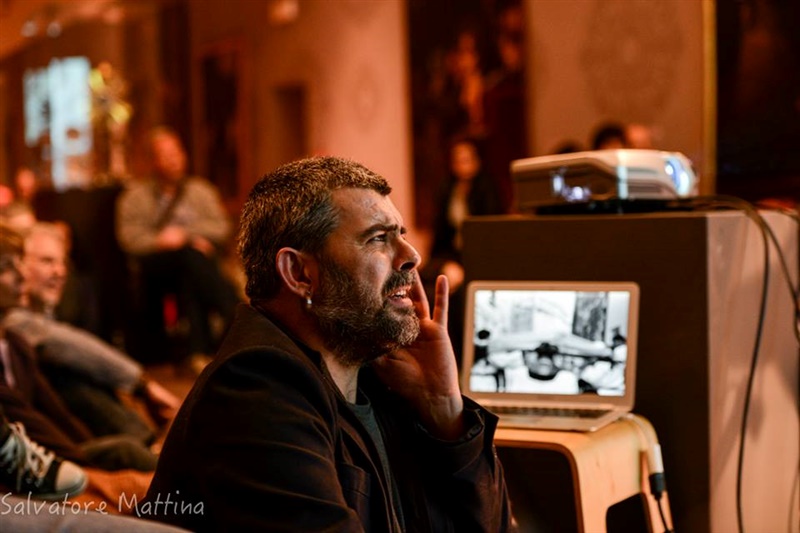 - 2004-l 2010: member of the Associazione “Piccolo Formato”, Bologna;
- 2004 – 2005: he conducts, with the video maker Simone Ciani, various didactic laboratories with adolescents, on commission of social voluntary associations in Bologna, producing two cortos “Si…dimmi” (2004) and “Divieto d’accesso” (2005);
- 2008: an analogic photographic course at ISART (Istituto Statale D’Arte) Bologna;
- 2011: he conducts part of the course “Incontri di Fotografia” at the Ex Q, Sassari;
- 2011: he plans and conducts “Come mi Vedo-no”, on commission of social services of the city hall of Palau;
- 2012/2013- he plans and develops “Dentro il Cambiamento, paesaggi di un futuro presente”, the project of extra-curriculum formation to the use of audio-visual media for students of three Liceums on the Province of Sassari, on commission of the Associazione Ogros;
- 2013 – he plans and conducts the project “Vivere la Città” for young people from 6 to 21 years old, on commission of Palau Social services.